The Central Indiana Land Trust Inc. (CILTI) has received a $1 million gift from Leonard and Kathryn Betley and their family to support reforestation and land protection, as well as to establish an endowment for the Hills of Gold Conservation Area.

CILTI currently protects 700 acres in this area in southwest Johnson County, with plans to increase the acreage under protection. In recognition of the contribution, Glacier’s End Nature Preserve near Trafalgar will be renamed Betley Woods at Glacier’s End. 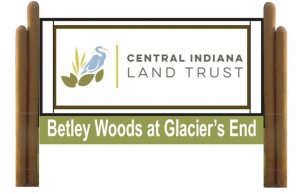 “CILTI is honored to receive this gift from the Betley family,” said Cliff Chapman, executive director of the Central Indiana Land Trust. “Their generosity and civic engagement have long been a guiding light to people who care about Central Indiana, and this gift ensures that their legacy will, literally, grow.”

Leonard Betley is a retired managing partner of the law firm Ice Miller, as well as the retired CEO of The Richard M. Fairbanks Foundation, the Walter Cancer Foundation and the Regenstrief Institute and Foundation. He has served as board chairman of Newfields, Park Tudor and the Indiana Chapter of The Nature Conservancy. Katie has spent 50 years serving as a leader on boards of organizations including Newfields, the Indianapolis Zoo, the Indiana chapter of The Nature Conservancy, the United Way of Central Indiana, Community Health Network, National Bank of Indianapolis and more. She served as a trustee of Indiana Energy.

Located just north of the Brown County border, Betley Woods at Glacier’s End sits where a line of glaciers stopped their southward march thousands of years ago. The resulting mix of both glaciated and unglaciated land supports a surprising diversity of flora and fauna.

Like the publicly accessible Laura Hare Preserve at Blossom Hollow, Betley Woods is part of the Hills of Gold Conservation Area, one of the most biodiverse forested areas in Indiana. The region is a haven for rare species, including state-endangered timid sedge, federally endangered Indiana and Northern long-eared bats, red-shouldered hawk, hooded warbler and worm-eating warbler. Several new-to-science spider species also have been found on the land, which features steep bluffs, exposed bedrock, shale-bottom streams and chunks of granite strewn across the valley floors.

Katie Betley grew up next door to Priscilla Lamb (now Johnson), who, along with her brother Randy Lamb and husband Tom Johnson, helped CILTI purchase the land that is now Betley Woods by selling it to the organization at a bargain price back in 2015. At that time, neither the Johnsons nor the Betleys could have anticipated how this piece of Johnson County’s natural beauty would connect them forever.

“The generosity of these two families will ensure that Indiana’s natural heritage remains accessible for generations into the future,” said Chapman.

Jen@jtprinc.com
317-441-2487
An award-winning communicator and recognized leader in Central Indiana’s public relations community, Jen helps us tell our story in the media. She is the founder of JTPR, which she and her husband John Thomas own together.