In this 60th anniversary year of the National Natural Landmarks program, we asked our staff to share their favorite NNLs for the winter newsmagazine. Our Development Systems Manager, David, offered this reflection after one year as preserve monitor at Big Walnut.

I have enjoyed getting to know Big Walnut natural area over the course of a year by volunteering with The Nature Conservancy as a preserve monitor. Through my monthly visits, I get to see this property throughout the seasons—a privilege that reveals things I wouldn’t learn in just one visit.

Big Walnut is a 2,458-acre natural area which encompasses two preserves and several trails. Co-managed by The Nature Conservancy and Indiana DNR, Big Walnut was registered as a Natural National Landmark in 1968.

Here are some of my favorite observations from one year at Big Walnut: 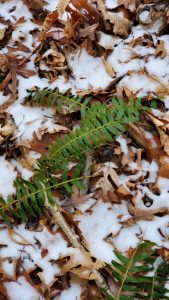 Winter: I took my first hike on the Tall Timbers Trail in December 2021 with TNC’s volunteer coordinator, Esmé. She walked me through the volunteer role and encouraged me to take pictures and report back.

In January I took a hike on the Hall Woods nature trail and encountered deep green ferns coming through the light dusting of snow. The banks of Big Walnut Creek had a thin layer of ice. 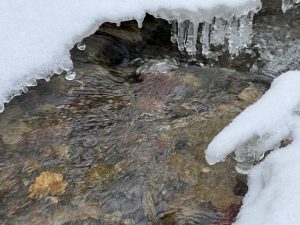 In February I returned to the Tall Timbers trail, this time with more snow on the ground. I spooked several deer as started down the trail and I watched them take off through the deep ravines. Wildlife tracks were everywhere in the snow! A better naturalist than myself would have been able to identify which forest creatures had come through, but it was amazing to me to see just how many creatures call this place home. As I continued down the trail, I came to a low creek bottom area, through which several tiny creeks flow as they make their way to Big Walnut Creek. Seeing these tiny creeks flow under the ice and snow was a treat.

Spring: In March I returned to the Tall Timbers Trail where a trail re-route had just been completed, adding a more scenic start to the trail. The air still had a chill and the trees were still bare, but new green shoots were beginning to emerge through the forest floor. Down the creek bottom area of the trail, Virginia bluebells and wild leeks were sneaking up through the leaves. 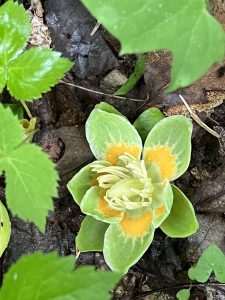 In April I made my way back to help with a garlic mustard pull on the Tall Timbers Trail. Thankfully we found only a little garlic mustard thanks to the diligent work of TNC stewardship staff and previous volunteers. What we did find were many different wonderful wildflowers blooming: trout lilies, squirrel corn, trillium and many others. After this volunteer day I walked a newer trail that weaves in and out of an area where TNC has planted many trees. It was encouraging to see this new forest taking shape.

In late May I returned to Hall Woods. So much had changed during the month of May. The trees were full, new flowers bloomed, and turkeys strutted around the cornfield neighboring the preserve. My favorite observation was the many beautiful tulip poplar blooms littering the forest floor. 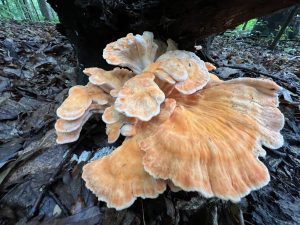 Summer: I returned in late June after having taken a short vacation out west. While the natural areas out west were spectacular, I was happy to return home and visit Big Walnut, where the greens of the forest were deep and vibrant, and life was everywhere. I encountered a few raccoons heading back to their little hole in a downed tree as I hit the trail. The path was damp from recent rain, and the fungi were out in force, including a beautiful orange chicken of the woods mushroom (which even though many enjoy eating was left in place for others to see, because it’s a nature preserve!).

In July, I continued appreciating the forest full of life. I returned to one of the newer trails that passed through some open areas where there were many coneflowers and quite a few milkweed plants.

In August, I spotted a few pollinators visiting the many flowers and enjoyed watching the low flow of the creek trickle over the rocks.

Fall: In September when I visited the Tall Timbers trail, the air had started to cool and the creek ran very low. The leaves were still very green and a few of the summer flowers were still in bloom. I found several bumblebees. 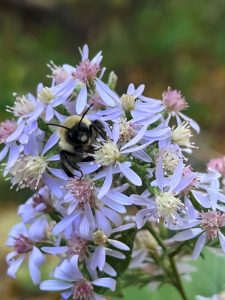 By October, the Tall Timbers trail had changed again, with leaves transformed into all shades of orange, red, and earthy browns. Leaves floated on top of the small streams, at times making it challenging to find solid ground. I again saw several deer, which I hadn’t seen since winter.

In November, as I walked the trail, the forest had returned to a very similar state as it had been a year ago. I reflected on the year that had passed at Big Walnut. What a gift to experience all four seasons in such a special place.

I hope you find time to experience the wonderful treasures available in Indiana’s many nature preserves and National Natural Landmarks—not just in spring or summer, but throughout the year. Each season offers new and wonderful things in these amazing landscapes. 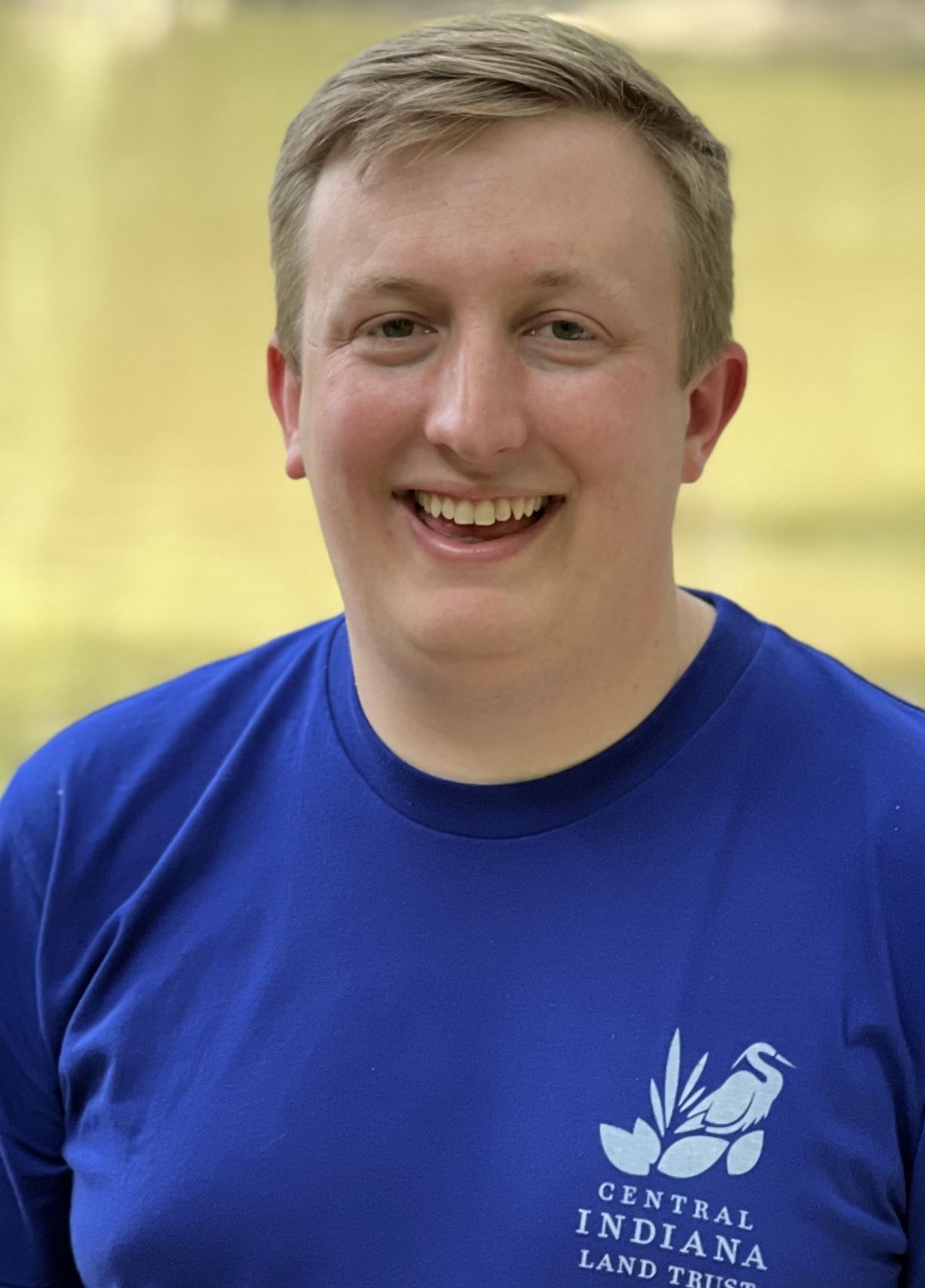 dbarickman@conservingindiana.org
217.778.9316
Born and raised in Central Illinois, David spent many days as a child wandering around the river, forest and lakes there. He works behind the scenes as a key member of our fundraising team. When not working, David loves to be outdoors hiking, fly fishing, kayaking or woodworking.